What is a Rule Object? Rule Objects are created for Firewall Rules to specify which ports you want to open up for that particular Rule (See Firewall Rule Basics for more information). Rule Objects and the ability to create custom objects are located in the same place as Network Objects (in the GUI, under Network -> Objects).

When creating a new Rule Object, click "Add Rule" and a new Window will appear where you can enter in all the specific details you require to open up your desired ports. By default, there should already be several "default" Rule Objects already created, representing the most common Protocols on the internet (HTTP, HTTPS, RDP, ICMP, DNS, SMTP, FTP, etc). All of these follow a particular naming scheme such as "Allow HTTPS" and "Allow RDP", etc. However, you are free to name your Rule Objects whatever you like. There are several fields you need to be aware of when creating a rule. 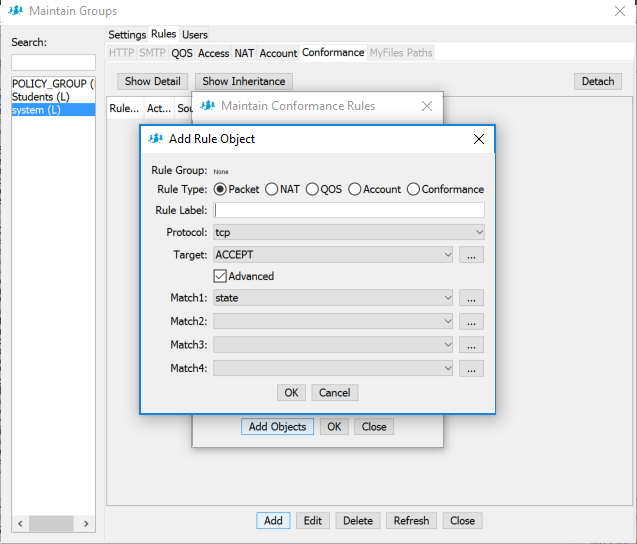 The Rule should now appear in the list of Rule Objects along with the rest. You can now use it in creating Firewall Rules.

WHAT IF I WANT TO ALLOW MULTIPLE PORTS?

If you want to allow more than one port in the one Rule Object, it can be done when selecting "multiport" in Step 6 above. When entering a target value, you can put in more than one port number separated by a comma (but no spaces in between). For example "8443,3389,80,443" (without quotes). Click "Add", then "OK", then "OK" again to confirm the rule.

CAN I ALLOW A RANGE OF PORTS?

If you have a range of ports that you want to open up, that can also be done in the same place as mentioned above (Step 6). Ranges of ports are usually required for protocols such as UDP, but in some cases, TCP as well. Under the "multiport" match and the "Enter a Value" field, say you want to allow ports 1600 all the way to 1700. Enter in the values "1600:1700" (without quotes) The colon will denote the port range inclusive of the start and end ports. You can also allow multiple port ranges but separating them with a comma (without spaces). For example "1600:1700,1850:1923,15234:160230" (without quotes). Click "Add" then "OK" and then "OK" again to confirm the rule.

HOW DO I KNOW WHICH RULE TYPE TO USE?

The different options of Rule Types can be quite confusing. By default, "Packet" is always selected and is more commonly used when creating Firewall Rules. However, there will times when you might need to use other Rule Types.